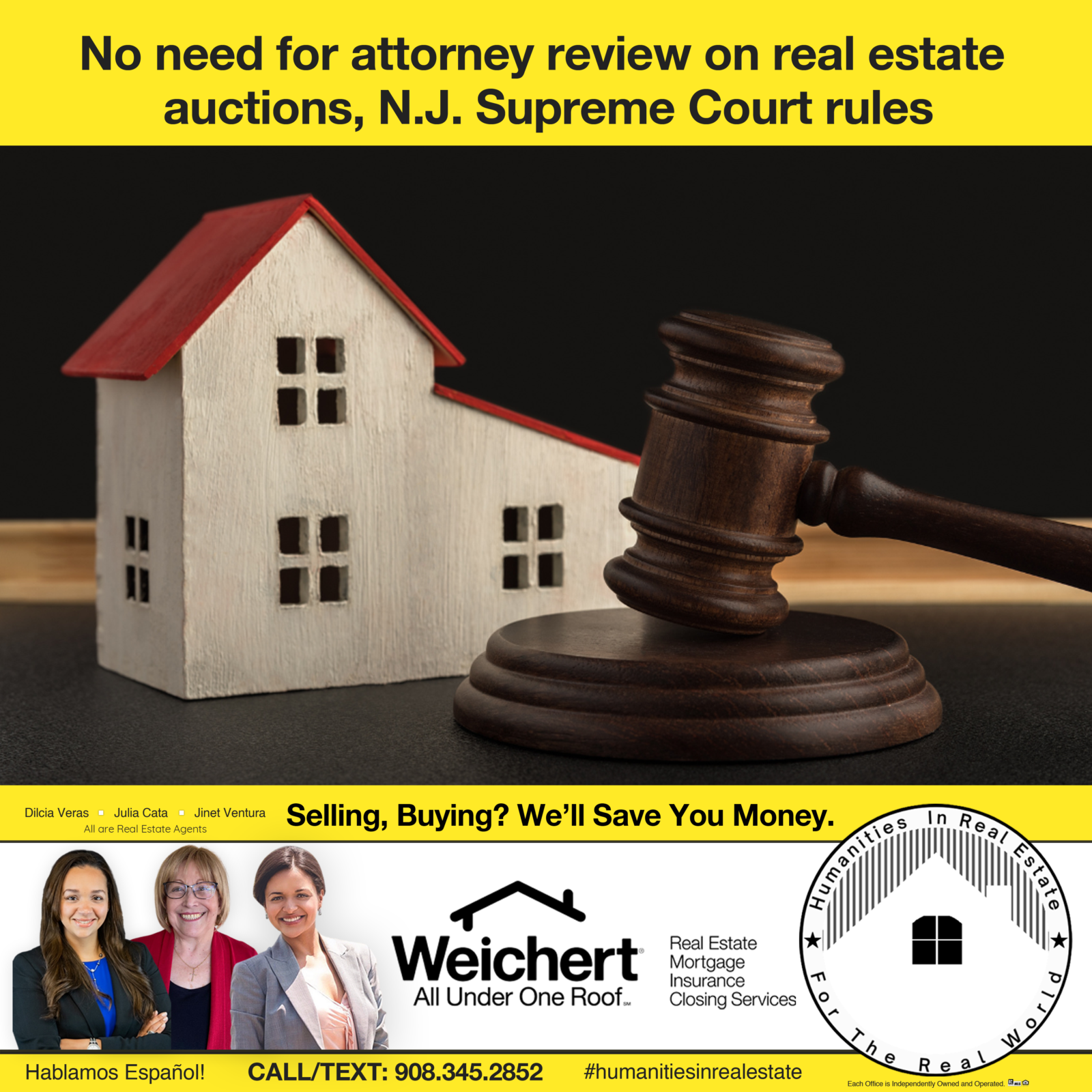 In a case over a failed home auction, the New Jersey Supreme Court determined real estate auctions are not the same as typical property transactions and do not require a three-day attorney review.

The six-member court said such a mandate would upend an auction’s intended finality with a top bid.

Imposing a three-day attorney review on auctions would “fundamentally interfere with the method by which buyers and sellers choose to conduct such sales,” wrote Justice Anne M. Patterson, who authored the unanimous June 9 opinion.

“Were we to permit counsel to cancel contracts for any reason after an auction as in a traditional real estate transaction, buyers would be deprived of the opportunity to purchase property at a bargain price, and sellers would lose the benefit of an accelerated and final sale,” Patterson said.

Mengxi Liu placed the winning bid of $1.21 million in October 2016 on a residential home in Bernardsville. Brokerage firm Max Spann conducted the auction for the property, owned then by the Sylvester L. Sullivan Grantor Retained Income Trust with John C. Sullivan as trustee. Sullivan entered into a real estate auction agreement with Max Spann.

In the 5-0 opinion — with Justice Barry Albin not participating — the justices upheld the Appellate Division ruling that consumer protection objectives were not violated by forgoing a three-day attorney review in Liu’s case, and required Max Spann and Sullivan to equally divide the $121,000 deposit in escrow from Liu.

Patterson said the notice and template sales contract that Max Spann provided Liu prior to the auction warned her that any sale at the auction would be final with no attorney review period.

In addition, Patterson maintained Liu had no defense for the breach-of-contract claims made against her by Sullivan and Max Spann for her failure to secure financing for the home after winning the auction.

Max Spann subsequently conducted a second auction and sold the property to a new buyer for $825,000.

Sullivan brought legal action against Max Spann for alleged failure to qualify Liu as a buyer with sufficient funds and failing to release the $121,000 escrow deposit to the trust. The trust also filed an amended complaint naming Liu as a defendant after the trial court ruled that Liu was an indispensable party.

Liu appealed, citing the state Supreme Court’s ruling in New Jersey State Bar Ass’n v. New Jersey Ass’n of Realtor Boards, which held that realtors preparing contracts are not participating in the unauthorized practice of law and a three-day attorney review period is allowed where either party’s counsel may cancel the contract.

In November 2020, the Appellate Division affirmed a trial court’s finding that the three-day attorney-review clause mandated in the 1983 N.J. State Bar Association decision does not apply to an auction sale.

A dissent by Appellate Judge Jose Fuentes enabled an appeal to the New Jersey Supreme Court to clarify the issue.

Liu asked the state Supreme Court to reverse the Appellate Division ruling. She maintained her failure to purchase the Bernardsville property was not her fault and that Max Spann engaged in the unauthorized practice of law.

Sullivan argued that allowing a party to cancel an auction contract would disrupt the practice of selling real estate at auction.

“The Supreme Court’s opinion repudiates the Appellant’s final attempt to throw the kitchen sink at a valid and enforceable contract,” said Pierre Chwang of Wilentz, Goldman & Spitzer, who represented Sullivan. “My clients, who did nothing more than put a home up for sale, can finally receive closure.”

But Randy Peach, a principal at Woolson Anderson Peach in Somerville who represented Liu, said he was disappointed in the high court’s retroactive decision.

“The issue in this case … was whether the broker, Max Spann, violated the law when it had one of its agents prepare the final auction contract, without including the three-day attorney-review clause,” Peach said in an email to NJ Advance Media. “Licensed real estate agents are prohibited from preparing any contracts for the sale of one-to-four family dwellings, without including this clause.”

Peter Verniero, a partner at Newark-based Sills Cummis & Gross and a former associate justice, represented Max Spann and argued before the state Supreme Court that if it ruled “yes” on attorney reviews, auction sales would be fundamentally altered.

“We are also pleased that the Court recognized that the bidding materials used by my client had served the consumer protection objectives outlined in prior case law,” Verniero said in a statement.

“The NJSBA is pleased that the Court carefully carved out a very narrow exception to the required three-day attorney review clause, only for transactions which are absolute auctions, without reserve, held in person, where proper consumer protections are provided to the public in advance of the auction,” Batcha said in an email Friday to NJ Advance Media.

Justice Patterson said even without a three-day review, “there was no unauthorized practice of law in the preparation of the Contract for Sale of Real Estate that Liu executed” after the auction.